Quite some time ago (two months!) I posted some 1930's photos from a collection I found in an antiques shop. I'd had every intention of posting once a week until they were all on... Well, I just remembered and thought Id' share a few more:
Starting with one from the little album. 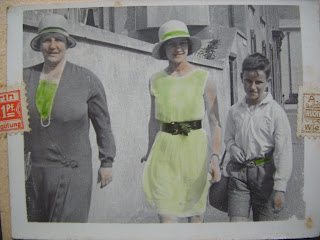 Tinted, and not particularly well. But with the magic of a sepia setting on the camera... 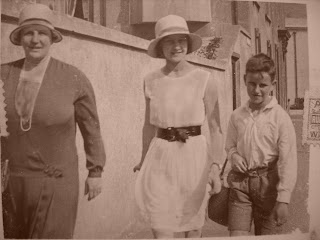 Just look at those hats! The girl in the middle is my new style icon, I think simplicity is the way to go.

Picnics are also in favour this season... 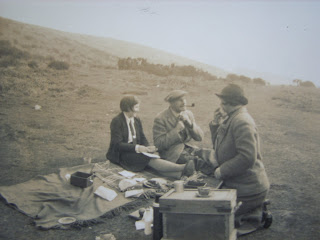 The girl in the middle, I believe is Denise (seen in many of the photos). I love her tie, ties on girls - Genius! Looking at that whopper of a box, I hope they had a car nearby... 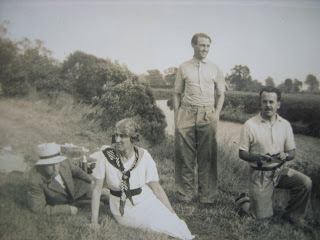 Not forgetting the boys when it comes to vintage. What does a chap need for a day out? Pipe, hat, rather nifty slacks? Check! 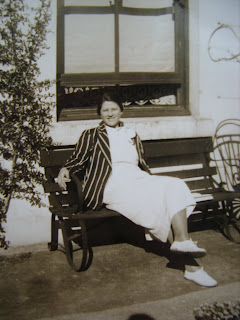 Blazer, pumps... I love it! Do we still say pumps, or should it be tennis shoes? I think I may still be in school mode - "Get your P.E. kit on... NOW!!!". Those plimpsols with little elasticated panels on the front that were actually rather comfortable... 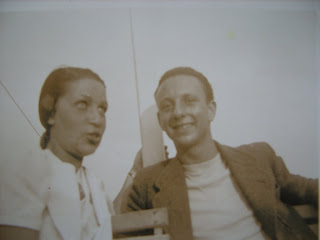 Isn't this just the best "non-posed" face photo? Unfortunately her jacket isn't in full view in this photo, but in the next one, it is... Can you zoom in? 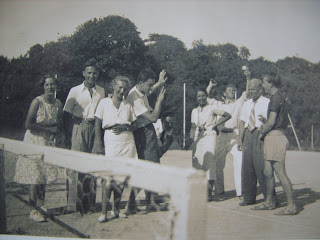 Same lady as before, fourth from the right. Her jacket? I love this photo, it's so much fun - Wouldn't you just love to be part of this group? For a start, a tennis court... I don't have one, nor do I know anyone with one! This is, I believe, in France.
On the back is written: Ghastly - At Francois home 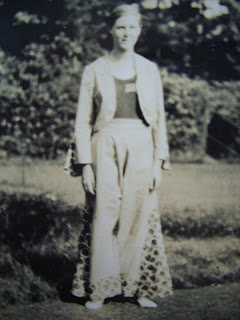 I'll leave you with an eighth picture. It's a little blurred, but I think you all know why this was chosen! I only wish the outfits had been in with the photos...

So, that's that for today. Just one question: I've found a 1930's(?) camera, with case for a song, but can't make up my mind whether or not to buy it, now that I know the price of the film, and can't even face up to asking the price of processing! But... I want a 1930's camera, what would you recommend, other than a Box Brownie?