Well my dearies, I was thrilled to bits to find I'd been given the "One Lovely Blog" award by The Butterfly Balcony - I did jump around screaming, I must confess! So I was taking a few days to think of the bloggers who will receive this award from me, then I discovered this afternoon, I have been given this award again! This time from Lady Cherry Loves - More screaming!
Thank you both, I am absolutely delighted.
First up, the rules: ﻿
1. Accept the award. Post it on your blog along with the name of the person who awarded it along with a link to their blog.
2. Pay it forward to 15 other bloggers that you have recently discovered.
3. Contact those bloggers and let them know they've been chosen. 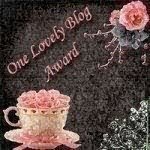 I'm going to pass this on to the following bloggers, I know there aren't 15, but I'm bending the rules, I'm a bad like that!...

Lady Lyburnum - Her post on Thanksgiving has tempted me into making a pie with the pumpkin sat on my worktop!

Eclectic Ephemera - This man seems to know what's going on, when I'm so clueless!

Thank you again, Wendy and Cherry, for my first and second blog award in a matter of 10 days!

I hope you're all having a wonderful day, speak soon

Urgh, did I feel ill? Yes, but I'm on the mend. Although I've been away from blogging, I have been trying to keep up with other blogs. So news, I have plenty...
I've been sewing like there's no tomorrow. I now also have a new stockist for my brooches.
I started knitting a Norwegian scarf, but then had to go back to the sewing, but I'm hoping to finish the scarf before Christmas...hmmm
I've made a huge decision about my future - I'm finally setting up the business I've dreamed about/planned/researched for the past 5 years. It's been in the making for long enough, so now I'm setting up as a Birthday present to myself (I really do deserve it after 5 years!). I can't give anything away yet, but you will be the first to know about it!
I have 29 followers - I love each and every one of you
The living room is finally being painted - The photo before is just showing the sample patch, but the colour is more of a sage-y green, and shows the new (to me) chair, bought from the antiques centre:
﻿ I made mincemeat, it's all bottled up and awaiting pastry! I can promise you, this is the best mincemeat I've ever made, and it contains almost half a bottle of brandy... Can you get drunk on a mince-pie? I'll do the research, so you don't have to!﻿

I went to see my new dentist - Two problems, I'm nervous of dentists and terrified of needles. I already knew I needed three fillings (my very first ones!), but tried to explain my predicament, so now I'm being referred to the hospital to be completely knocked out. Urgh, I feel horrible just thinking about it.

I'm behind with my Christmas shopping - I'm not half as organised as I said I'd be, the dentist really bought me down, and dare I say it, I'm not enjoying the shopping anymore!

I won a "One Lovely Blog" award from Wendy at The Butterfly Balcony - Thank you Wendy. I'm still considering who to pass it on to, so I'll get back to you with a dedicated post on that.

On the 13th, I went to see Austin Vince give a talk down at Garlands in Haverfordwest. I wasn't feeling 100%, and I certainly felt awful the next day, but it was truly fantastic. I don't remember a point where we weren't laughing. Some photos were taken, with the chance they might end up in a magazine, though the name of that magazine escapes me right now. If the photos are printed, I will post them here! There are, however, a few photos here - You can only see the back of my head (my best side!), I'm in the second row wearing a lime coloured jacket

I think that's all, but I will be back with the award post, and some Christmas shopping ideas